Why tweet in kindergarten? Ask Mrs. Camastro, she'll tell you.

Why her?  She hates technology.

She loathes the fact I've put 4 computer in her room and an iPad in her hands. She gives me dirty looks every time she sees me because now I'm trying to get her to lead a Twitter professional development session. 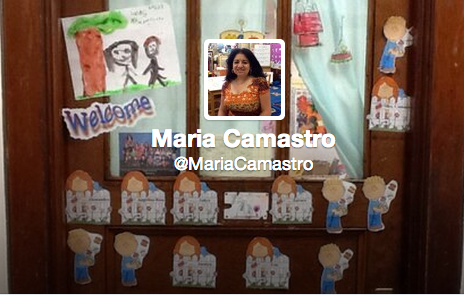 No, Mrs. Camastro doesn't actually hate me, but she certainly isn't a huge fan of technology. She'll be the first to admit it. But, she's also very open minded and willing to try new things to help her class learn and grow. And that is one reason Mrs. Camastro is who you need to talk to.

Whatever the excuse I point you toward Mrs. Camastro.

She has most of the parents in her class following her. Aunts and uncles in other states, and even countries, follow her. Grandparents are on Twitter to see her classroom. She has invited the world into her classroom, and they are happy to join her.

One of the best anecdotes of her success happened recently, on Grandparents Day here at PS 10. The grandfather of one of her students couldn't make it. No big deal. That grandfather was on Twitter and followed Mrs. Camastro. Throughout the Grandparents Day event Mrs. Camastro made sure she took photos of the event, particularly with this particular student, and mentioned the grandfather in the tweets. He was out of state but got to be an active, real-time, participant in the event.

How cool is that?

How powerful is that?

The mother who is a doctor. Due to her schedule she misses most school events. She recently told Mrs. Camastro that she eagerly sneaks peeks at her phone whenever possible, to check the Twitter feed. She said it makes her day to be able to have that connection to her child even when she can never be there.

Those are just two of the stories Mrs. Camastro has shared with me. There are others. Stories of uncles half-way around the world excited they get to be a part of their nephew's life. Family members "seeing" relatives more than once a year, getting to share in those great moments even if they aren't there.

And the students love it. They know family is watching even if they're not in the room, and they are excited about it. They let Mrs. Camastro know when their grandparents, aunts, uncles, and cousins join Twitter to follow her.

She doesn't tweet all the time, and has no set schedule. But a few simple tweets a day, a few minutes of time in total, lets the families of her students be active participants in the student's day, even if they never make it in to the room.

If you want to see how an "anti-technology" kindergarten teacher uses Twitter with great success, follow @mariacamastro. Amazing things are happening in her classroom and her students love that they can share it with the word.

Post-script:
Want great examples from other grades? A few of the teachers @PS10Brooklyn: