Mixing the digital and analog when it comes to reading and writing is always a tricky process. How much is too much? Where should the paper end and the digital begin? How do we differentiate?

Last year we played around with these ideas, a lot. As a district we purchased a license for Seesaw to begin making digital connections in the lower grades. For the upper grades we licensed Campus Press.

But at the end of the day not everything can be paid for, we still ned to leverage free tools. And we also need to make direct connections to traditional media. The actual pen is still pretty mighty.

Student were broken up into book clubs. The teacher built a Padlet for each club. The students would read the books and jot down things they noticed; either based on a particular theme the teacher asked them to look for such as character or setting, or open-ended items about the overall story.

In most cases the jots were physical jots on Post-it notes as they read. After reading a particular selection; a paragraph or set number of pages, the students would then review their jots. They would take the one or two they wanted to focus more on and add those to the Padlet. As they discussed their jots on the Padlet, through additional posts and comments on existing posts, they would begin to think about which jot they wanted to expand on, to "write long" about.

Once they decided which jot to write long on they would use their blog. Their blog post could include links to the Padlet, links to author pages, images that support their ideas, and so forth. Once they were published (after utilize Categories and Tags for organization) they would share with their classmates.

Students were then able to read posts from different book clubs and leave comments about what they noticed. This process made all the students both readers as well as authors. Students read and made jots on a book and once the blog posts were published they became the published authors others left jots about (as comments).

A visual matrix of the process: 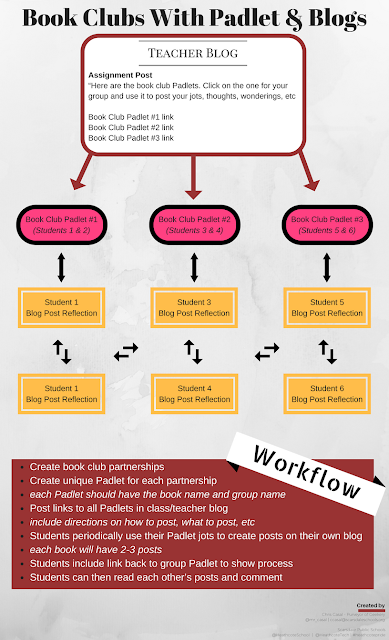 
Unfortunately our blogs are currently restricted to our school district domain, so I can't post student examples. But we're working on opening it up... ;-)
Posted by Chris