A few months ago the concept of live-streaming video directly to Twitter hit the market. Meerkat was the first app to launch. It rapidly gained popularity, so Twitter went out and bought its competitor Periscope. 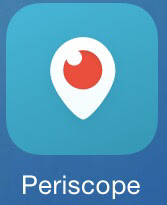 Why does this matter? Because live streaming video of school events is awesome. And not just graduations and PTA meetings, but everyday events. Things like student presentations and project shares are natural fits. If students are practicing presenting their work to an audience, their class, why not also give them some experience presenting live to the world? No, they can't see their Periscope audience, but knowing someone could be watching is a great way to hone presentation sills.

I used it for two main purposes this year:

Student shares
We started the idea of using Periscope when students from Ms. Boyer's class were getting ready to showcase their passion projects. Ms. Boyer assigned opened ended projects to her class. She said "go learn something, do something, make something. You have 1 month. At the end present what you did." Awesome assignment. Her students rocked it and came back with amazing things.

We felt Periscope was a natural fit for sharing the students' passion. It was a new app, a new technology, a new concept -- much like the passion project assignment. We asked students if they wanted to be Periscoped, and not all did. No problem. We had 13 of 24 agree to be broadcast live, and they loved it. The app gives a few analytics such as how many viewers were watchingand average length of view. Viewers can also tap the stream to give "hearts," which are just as they sound -- digital bits of love, akin to the favorite or like buttons. Students loved discovering their audience metrics after each share.

Another great perk of the live feed is seeing the handles of the audience members. At one point I noticed Adam Bellow was tuning in. This was huge for me because I know Adam but hadn't told him about the broadcast. What this meant was I had real, concrete context for explaining to my students the power of online connections and apps like Twitter and Periscope. Adam saw my tweet and joined in. He was an audience member that wasn't anonymous, he was someone we knew. It was great to have that conversation with my students, about their voice going beyond school and reaching real people, not just random usernames and avatars.

A great feature is the ability to save a recording of the live stream to your camera roll. It's an iPhone app so right now it's not in landscape format, but it's still great to have a recoding for later use... 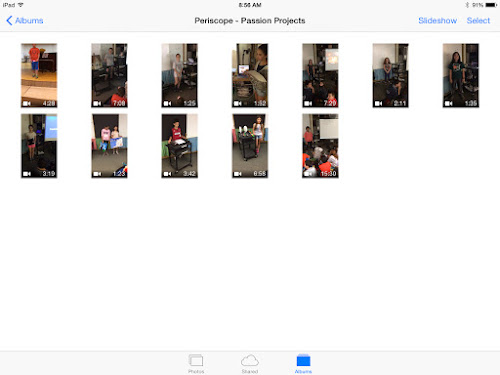 
Live performances
I started to do snippets of live events. We have an amazing music program that has three components: band, orchestra, and choral. When there are performances, all three elements come together. The performances have gaps during the switching of set pieces and instruments so I didn't want to broadcast the entire event. I would start a new Periscope for each section or even individual number if I knew it to be a long piece... 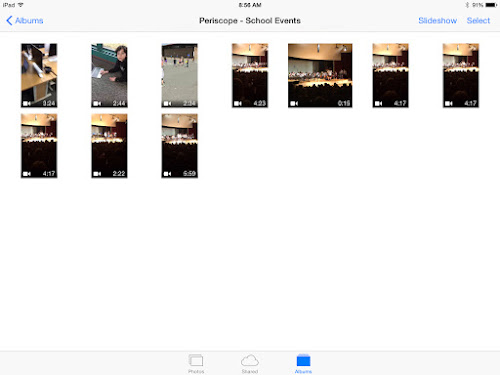 What's great about using Periscope in school is the extension of the transparent learning community. But more importantly it lets family members who can't be present take an active role in the students' success.

Moving forward
Periscope was new this year and everything I did was very much an experiment. We didn't publicize the Periscopes aside from a tweet a few minutes beforehand. I used my personal Periscope account tied to my @mr_casal Twitter handle because I had no reason not to do so. Still don't, but I have ideas...
Going forward, my plan is to:

I was a bit unsure at first of how I might use a live streaming via Twitter app, but after seeing how enthusiastic the students were about speaking to a live, global audience, and seeing the potential for parent outreach and celebration of school events beyond the building's walls, I have become a huge fan of Periscope and its capabilities and possibilities.

Posted with Blogsy
Posted by Chris