My iPhone Died and I Couldn't Be Happier

Takeaway: My iPhone is dead and disconnected but I am not. I am now a man of 1990s telephony with late 'aughts connectivity. Pleasantly ironic in a digital age.


About 2 weeks ago my iPhone starting losing its ability to keep a charge. The battery would charge just fine, but within an hour it would be 50% drained. Epic battery drainage.

This rapid charge/rapid drain wasn't a big deal since I have iOS device chargers coming out of my ears. I have my iPhone, my primary iPad, my back-up iPad (used for testing settings, apps, etc), the iPod Nano I wear on my wrist, not to mention the 4 standard iPods my wife and I share (oh, yeah, she has an iPhone too). Having chargers handy isn't a concern...

...So I ignore the problem and keep letting the battery cycle. Charge it up, let it drain, charge it up again. It worked and regardless of wether or not it was the smartest thing to do I kept doing it.

Yesterday morning I toss it on the charger for a few minutes and get the dreaded: 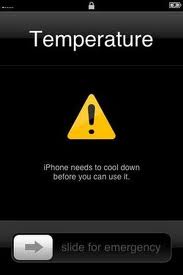 (photo credit: geek.com)
I turn it off, toss it in my lunch bag for the ride to work, hoping to cool it a bit. I have an icepack in the lunch bag but I put the phone in an adjacent compartment. Cool it down without the shock of sticking it directly next to an ice pack.

During lunch I take it out and toss it on a charger. Nothing. I let it charge for an hour. Nothing. 2 hours later the day is done and still nothing. Dead iPhone.

But all is not lost. I had just spent the day with no iPhone. Now, during the school day I don't use my phone very much since I'm teaching, but knowing it was most likely dead didn't cause panic in my Apple-loving teach-dependent psyche.

Last night, Wednesday, I went to Verizon and they were great about it. Under warranty. New one is no problem. None in stock. We'll ship it overnight. But, since it's after 5 you might not get it until Friday. Surprisingly no panic.

I go home, explain the situation to my wife who, expectedly, panics a bit...


Ok, so maybe it was more sarcasm and good-natured ribbing than true panic...

Me? Still no panic. Why no panic on my, uber-digital connected part? 2 reasons:

So why the title "My iPhone died and I couldn't be happier?" For me, the iPhone was just a device. It wasn't the device. I have, with careful intention, worked to make my life and my work synced and backed up across multiple devices and easily accessible anywhere.


If one device goes down it's not the end of the world. In fact, it almost the opposite. I still have complete access to all my contact, apps, documents, and functionality, but now I have one less physical device to worry about. Happy in the knowledge my personal technology plan has worked. No phone yet all is well.

So, my iPhone is dead and I'm actually kind of enjoying it. Skype me, GoogleVoice me, email me, iChat me, Facetime me. Facebook.... Google Plus.... Foursquare... Got it all. Everywhere. My iPhone is dead and disconnected but I am not. I am now a man of 1990s telephony with late 'aughts connectivity. Pleasantly ironic in a digital age.

But of course, I waiting with eager anticipation for FedEx to arrive with my new iPhone...
Posted by Chris