This post originally appeared on the Daily Genius on October 27, 2016

Rock, paper, scissors isn’t a game. It’s a means to an end. The game isn’t the purpose, the game decides what comes next. No one plays the game to simply play the game, the game is usually played to decide an order for the bigger game; who goes first, who gets the better seat, all those important childhood decisions.

The other key point to the game is here. No one element; the rock, paper or scissors, is greater than all of them. Each is better than one other but none better than all, and most importantly they all need to be part of the game. 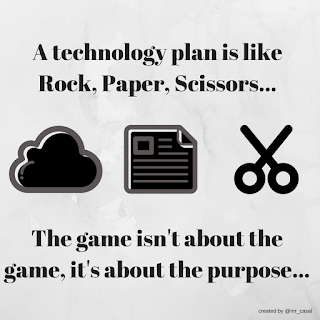 And the three elements; the rock, the paper, and the scissors? No one should be thought of as more important, no one should be kept out. And what are the three elements of a technology plan? The tech, the training, and the support. A 1:1 device plan looks great on paper, but how you do fund it? How do you implement and support it? How do you train the staff and students to get the most out of it?