Thinking about my why: I am a purveyor of geekery

I am not a computer teacher.

I am not a technology teacher.

I am not an integrator, facilitator, technician, or guru.

I am a purveyor of geekery.

I am a purveyor of geekery because I am more than any of those first items listed. I am more than a pigeonhole of knowledge or experience. I am a teacher, a techie, a learner, a nerd, a student, a person with a passion. It is that passion, for the geeky side of life, for the things that aren't limited to electronics but still wave the geek flag with pride, that makes me a purveyor of geekery.

I've been reading Simon Sinek's Start with Why and it has really opened up my thinking and my approach to what I do.

I gave myself the "purveyor of geekery" moniker when I began my job in Scarsdale. I was building my district webpage and looked at what the other folks in my position across the district had listed as their job titles. I saw computer teacher, technology teacher, computers, technology, and probably an integrator and/or facilitator in there too...

It made me think about what I wanted my job title to say about me. I had never really thought about it before that moment. And I never fully understood why I did it until I began reading Sinek's book.

Sinek talks a lot about mission and vision of companies; what he thinks makes them successful and what he thinks they truly sell. He spends a lot of time talking about Apple. He specifically points out that Apple is official Apple Inc, having dropped the word "computers" from their name a number of years ago. His theory is that by dropping the word "computers" it allowed Apple to more easily sell a lifestyle, across products, then with the single name. He references Dell and how they are, officially, Dell Computers. And when Dell has tried to branch out into other electronic sectors, like music players, they have failed. Sinek believes this is largely due to the fact they position themselves as a computer company and attempt to sell related devices, not because they believe in the product but because the other guy, Apple, is doing it too. Apple is different in that they sell the brand, not the item. They sell the "think different" ideal which is able to cut across products and markets.

This is why I'm a purveyor of geekery. I don't want to be thought of as "just the computer teacher" or "only the tech guy" but rather have a title that more genuinely reflects what I do. I geek out with students and colleagues on things electronic and otherwise.

Before adopting the purveyor of geekery moniker I would get what I'm sure many "computer teachers" get; the surprised look from a colleague after a lesson and the "wow, that was really well done." as if they didn't expect the tech guy in the lab to actually know how to teach. I'm a teacher first. A techie second (or maybe lower some days).

Since I've been purveying geekery I've gotten vastly different reactions. No longer are people surprised when I teach a good lesson or have an insight into curriculum or have random trivia knowledge int he faculty lounge. Now I get mostly shrugs and "well, he is the purveyor of geekery." comments, which I take as a compliment. When I suggested we get rid of tri-fold boards and try Ignite and TED Talks with students people took me seriously. It's not to say they wouldn't have taken my suggestions if I was the "computer teacher" but by positioning my self as the purveyor of geekery I feel I have broken down a few stereotypes and cliches about what people in my role are willing to try and what we can, hopefully, pull off.


I am not a job title, not limited by a single skill or room in a building.


Why am I a purveyor of geekery? Because I want to be more than a teacher, more than a tech guy, more than a technology teacher. I want to learn about geeky stuff, try things, share things, and spread the geeky love. And that love is more than computers. It's hardware and software, it's mobile and labs, it's coding and makerspace, it's trying new things and pushing the limits.

I am a purveyor of geekery because I don't want to be defined by a job title or salary line and I want my students to think of me in more creative ways than just as a "computer teacher." If I'm pushing the limits my students will push the limits. And when they push the limits I have purveyed the geekery... 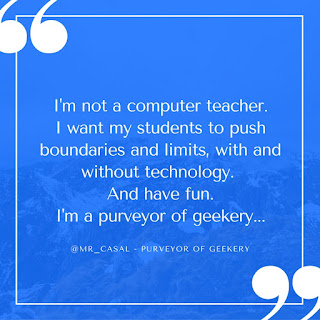 Email ThisBlogThis!Share to TwitterShare to FacebookShare to Pinterest
Labels: geekery, the why