As a former film student I couldn't help the title when I realized I ended up with a list of 7. My nod to a classic American film and its inspiration, Akira Kurosawa... 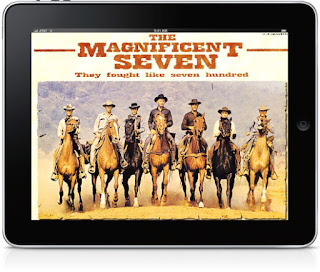 I am a computer teacher in a lab, a technology coordinator for my school, and I am often a part of many administrative teams focusing on the overall school community, student achievement, data and compliance. Basically, like most educators, I wear many hats.

I have found some iPad apps useful in the classroom, but pretty much irrelevant outside of it. I have found apps I can't live without during administrative or tech coordinator duties that have no real place in a classroom. I have also found apps useful across the spectrum of education.

This is an initial quick list of my "magnificent 7" app, apps I can't live without. I will be breaking them out individually in greater detail in future posts.

1) Safari - $free & built in - I start with it because I think it is the most overlooked and useful app available. It's free, built in, and works just like a desktop browser. With Safari, you can access any internet site, and even sites with dedicated apps (the New York Times, for example) are still available via Safari.
Free, pre-installed, versatile, familiar... what more can you ask for?


2) Mail & Calendar - $free & built in - I put these two apps together because they integrate so easily, seamlessly, and naturally. You get an email with a date? Click on the date to add it to the calendar. Want to invite contacts to a meeting? It's simple to do from within the Calendar app, you can even send notification and reminder emails.

Mail & Calendar are great for the same reasons as Safari: they are free, standard, and work simply and flawlessly. There are thousands of apps but sometimes the most basic are the most useful. My Department of Education Outlook/Exchange account is synced with Mail. All the DOE contacts are at my finger tips. I can easily add colleagues to Calendar events and they get automatic notification, invitation, and reminder emails. The iPad with Mail & Calendar allows me to be on the move yet still connected in a streamlined and effective way.


3) DropBox - $free - Dropbox.com is a free "cloud" service. Basically, sign up and get 2 gigs of free online storage. Invite colleagues and get an extra 250MB for everyone that signs up. Upload files and folders, create folders, share folders, etc. In addition, when you install DropBox on your desktop/laptop, the local DropBox folder is an instant sync to your online account. The second you add a file to it on your local system it is added to your online account.

My favorite part of DropBox is the ability to share folders with colleagues. The ability to have an instant sync of important files from any machine connected to the internet is invaluable.

Great for reading PDF files and making comments, signing documents, etc. I am currently using it as a way for teachers to sign out equipment: they sign directly on the iPad, enabling me to go "paperless", as well as simplify the process of filling out forms. Combined with DropBox, I am able to share and edit files with the various committees I am involved with, paperless and instantly. I paid $2.99 for it in February and it as been a great investment.


5) Plaintext - $free - Very basic text editor which syncs directly to DropBox. Take basic notes directly on the iPad and your notes are automatically synced to your DropBox account.

The built-in iPad Notes app is great and it syncs with your MobileMe account, but DropBox is more versatile and free so PlainText ranks slightly higher on the "usability" scale in my opinion.


6) Remoter - $0.99 - Remoter is a VNC app. It allows you to connect to any computer on your network, via IP, and take control. Why is this useful? For any teacher with a SmartBoard, you no longer have to sit at your laptop to control the board. Use Remoter to connect to your laptop and your iPad is essentially a wireless touch-screen interface for your computer.

SmartTech, the maker of SmartBoard, makes a tablet designed to control a SmartBoard remotely and it costs hundreds of dollars and is only useful with the SmartBoard. Remoter allows you the same SmartBoard control as well as full access to your entire system for $0.99. In addition, you can save multiple systems' IP information and easily switch between them (I currently have 5 systems saved in my Remoter app so I can view, control, and troubleshoot from anywhere within my building's WiFi network).

There are many VNC apps from the free Mocha VNC Lite to the expensive, $29.99, LogMeIn Ignition. I have both of these in addition to Remoter (yes, I paid $29.99 for LogMeIn - worth it, but that is for a later, longer post) and after extensive use I have found Remoter to be the most user-friendly, the most responsive, and with the cleanest, most intuitive interface. I like Mocha and LogMeIn but for $0.99 I feel Remoter is well worth the money.


I have many more apps currently running on my iPad, including reference apps, whiteboard apps, and database apps....

... there are a lot. In future posts I will go into more specific detail (screens shots, etc.) on the above 7 as well as more lists of activity-specific apps useful to the iPad educator.
Posted by Chris